I am new to cleavr and, so far, finding it absolutely amazing. Is it planned to support newer versions of MariaDB in future, like 10.7? Moreover, would highly appreciate a convenient upgrade from the 10.4 version to the newer ones.

Thanks and best wishes

First of all, welcome to Cleavr Forum. And we’re glad that you’re liking it so far.

We plan to support MariaDB 10.7 but right now there are some other features/fixes on top priorities. So, it might take a while before we approach supporting MariaDB 10.7.

We’ll notify you once we start working on the feature.

Please check it out and let us know how you find it.

NOTE: We don’t support un-installing a database service from Cleavr inorder to protect users from losing their data. But, we’re working on making this a better experience. Do let us know if you still want to un-install existing database service and install MariaDB 10.7.

@anish Thank you! That are really awesome news

Do let us know if you still want to un-install existing database service and install MariaDB 10.7.

And yes, still want this feature. Would be nice to be able to kind of upgrade from one MariaDB Version to another, keeping all DB’s and DB users.

@anish I attempted to upgrade (10.4 to 10.7) on a test server by myself. It worked fine, including keeping all DB’s, DB users and cleavr compatibility. Here is what I’ve done as root user:

In cleavr adding DB’s and creating users worked fine. But as expected because I am unable to tell cleavr that the mariadb version has changed. On services overview, it is still saying that it is 10.4. 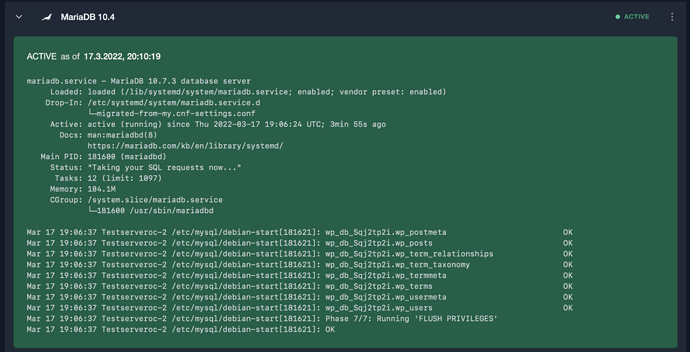 Would be so great to see this as an option in the dropdown menu to kind of “officially” upgrade to 10.7 in cleavr. This same procedure could be used for all upcoming versions, so I would say it would be worth implementing it. Especially as there is no possibility as setting up a new server to get 10.7 “officially” at the moment

Glad that you got it working.

You updated an existing database to 10.7 but I am worried it may show some unwanted behavior.

I’ll bring this to the next team meeting about its possibility and consequences.

You updated an existing database to 10.7 but I think it may show some unwanted behavior.

I think it would not, as MariaDB is backwards compatible. https://mariadb.com/kb/en/upgrading-between-major-mariadb-versions/

I haven’t had any issues with database integrity in the past, upgrading MariaDB. Have been using huge complex db’s for marketing analysis without any problems.

What can probably happen is that the upgrading overwrites some configs of the mariadb server. So, it would potentially be better to remove (maybe purge) the old version first and then install the new one in the cleavr way. But keeping the /var/lib/mysql/ and running “mysql_upgrade -uroot” to upgrade existing DB’s.

I am really burning for this, and would like to support you on this as much as I can

First of all, thank you for your valuable time and effort. We really appreciate it.

I can understand the need for it, but we’re not in a position to implement this. One of the reasons is to avoid any breaking change it may introduce.

Since you’ve already gone through it, do you want to write a blog about it? If you don’t want to do it, I’ll be writing a blog post about Upgrade MariaDB 10.4 to MariaDB 10.7 with database and its users giving you credit for bringing this up and all the resources you’ve shared.

One more thing: we’ve got a Quick Script repository for Cleavr GitHub - cleavr/quick-scripts

. I’m still hoping that the topic may come up again in the future. At least a possibility to remove 10.4 and install 10.7 the official way